How many people routinely think to incorporate eggplant in their diet? Growing up, I was never exposed to this purple vegetable and so it wasn’t something I ever thought to make when I was on my own. I decided to make Eggplant Parmesan while I was in college though, because I saw a recipe with a delicious looking picture! I was diving in to uncharted waters, but this was the beginning of my obsession with discovering healthy recipes!

Turns out? I LOVED it. The eggplant was tender and flavorful, pairing nicely with the marinara sauce! I was thrilled!! I found a new vegetable to add to my repertoire! Do you ever get this excited about a vegetable??

Since I have been seeing eggplant recipes popping up through the blogosphere the last few days AND because eggplant is in season from August thru October, I decided I would devote this post to the wonderful world of eggplant! 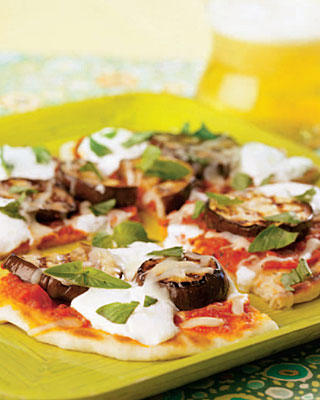 As if those reasons were not healthy enough for you, eggplant is even refered to as “brain food.” The flavonoid nasunin, an anthocyanin from eggplant peels, is a strong antioxidant that has been shown to protect cell membranes from damage. In animal studies, nasunin was found to protect fats in the brain cell membranes. This protection keeps those fats fighting free radicals, letting nutrients in and out, and receiving messages that instruct the brain how to perform. What a healthy and tasty addition to your diet!! 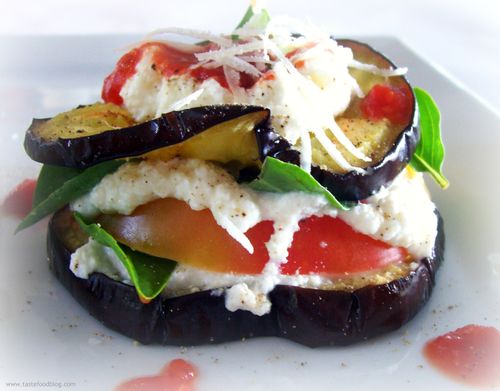 Last night, I intended to make an eggplant sandwich recipe that I discovered on the website for Monica Nelson Fitness. Seriously, the recipe sounds SO good and I had every intention of making it, but I had some whole wheat wraps to use up and made an Eggplant, Hummus, and veggie wrap instead. How did I prepare the eggplant? I sliced off 3 round medallions, seasoned each with basil and and oregano, and let them sit on in the skillet for ~5-7 minutes until they were cooked through and tender!! Then I diced each medallion in to cubes and added to my hummus and veggie wrap! DYNAMITE!

Even though I neglected to take a picture, I thought maybe the next images might spark your interest to try a new eggplant recipe!