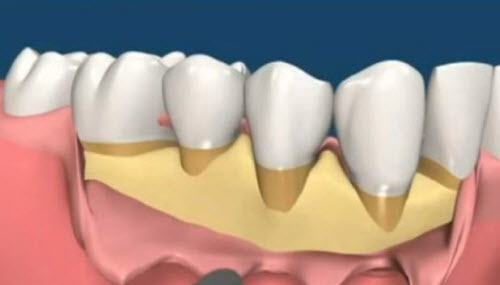 It is sometime that you may discover some blood that contained in your saliva when you are brushing your teeth or spitting. You may get panic first but will then get a sigh of relief once you realizes that it is simply a minor bleeding gums. There are people thinking that this can be caused by a person’s body is too ‘heaty’; and some people claimed that it is because they brush their teeth too rigorous.

Most people tend to not treat bleeding gums seriously. They not really aware that this could perhaps indicate some critical issue. Dr. Smith, a reputable dentist from a local dental clinic clarifies, “It’s rather common for people to not knowing that they’ve got an issue with their gums. This can be the case as it’s due to bleeding gums tend not hurt so much in the early stages. And very common where most of the people are not going for check-ups regularly. As most people tend to assume that if they didn’t get any pain, this means that their teeth are healthy and is not necessary to seek for dentist.”

The following are some of the possible causes for bleeding gums:

Dr. Smith also adds that gingivitis is the most common cause if bleeding gums. Gingivitis literally means ‘gum inflammation’ and is characterized by the following:

Gingivitis is caused by the long term effect of dental plague deposits in between the teeth. Plaque is a sticky, almost invisible film mad of different types of bacteria, mucus and food debris. It is actually soft and can be easily removed by regular tooth brushing and flossing. However, if plague is allowed to build up over a period of time, it will eventually calcify and harden to form dental calculus/tartar. The formation of calculus in turn, promotes more plague to accumulate. Unlike plague, dental calculus can only be removed by dentists using ultrasonic scalers or by manually scraping them off. It is the bacteria of plague which produces toxins causing gums to be red, swollen and bleed easily.

Dr. Smith points out that it is quite common for people to avoid brushing the areas of the gums which are bleeding, but this worsens the condition because that allows plague to continue to build up. One should continue to brush the problem areas gently and bleeding should soon stop. But if it persists, one should seek dental help.

“These days, gingivitis is the most common type of dental related diseases, even more common than dental caries. It can affect practically anyone who has teeth, even in children and generally speaking, the extent and severity of gingivitis can increase with age if plague control is not maintained.”

There are certain risk factors which may contribute to gum disease, i.e.:

Bleeding gums is a serious problem as it may either indicate the beginning of a gum disease or a serious underlying systemic problem. Bleeding gums can progressively worsen if proper treatment and care is neglected. It may start off with mild bleeding during brushing but it may worsen resulting to the recession of the gums from the teeth where bleeding then occurs more frequently. ‘If gingivitis is allowed to progress, it will eventually lead to chronic periodontitis. Periodontists is when the periodontal ligaments attaching the tooth to gum and underlying bone, and the actual bone, is destroyed. This tooth may become loose, it will hurt and sometimes even pus starts flowing out between the gums and teeth, eventually leading to tooth loss,” explains Dr. Smith.

Dr. Smith advises those with bleeding gums to seek medical help before the condition worsens, as bleeding gums per se in gingivitis is reversible, but once it progresses to periodontitis, the damage is permanent, i.e. bone and gum loss. Hence regular dental check-ups at least every six months is important in detecting the problem at its’ earliest stage.

The general perception of a gum problem is that it is contained only within the oral cavity. But in actual fact, the skin of the oral cavity is rich with blood vessels, and bleeding gums which are open wounds in the mouth, allow bacteria and toxins to enter the body’s bloodstream. Studies have shown that there is a strong association between periodontal disease and coronary disease. Uncontrolled periodontal disease can worsen cardiovascular related problems, i.e. coronary heart disease and stroke. This is said to be due to the persistence of high levels of backteria around the gums which can eventually flood into the bloodstream, causing systemic problems. Hence it is important to look out for signs of gum problems such as the following:

The first step is to identify the underlying cause of bleeding gums. If it is a medical problem, one should seek the help of a doctor to treat the underlying problem whereas if the cause is dental, which is more common, the best treatment is to maintain good oral and dental hygiene.

Bleeding of the gums can be managed through applying gentle pressure with a gauze pad soaked in ice water. In addition, do rinse with warm salt water (one teaspoon of salt to one cup of water) three times a day as this helps the gums to heal quicker. In some cases, a dietary change may be necessary as sore and bleeding gums can be aggravated by citrus fruit and juices, rough or spicy food, and alcohol.

Bleeding gums is a progressive disease. One should not suffer the consequences of a condition which is very much preventable and is in fact, reversible if treated early.